Men vs. Women in Retirement

You probably remember the best-selling book Men Are from Mars, Women Are from Venus, by John Gray. It was a cultural phenomenon back in the 1990s, focusing on how men and women look at the same elements in a relationship from very different points of view. More than two decades later, it turns out this concept also applies to how men and women plan for and experience retirement.

A survey of more than 3,000 retirees and pre-retirees between the ages of 40 and 79 conducted by Athene* showed that while men and women experience similar overall levels of happiness in retirement, there are key differences in how they plan for it financially and emotionally.

How They Save
When it comes to planning financially for retirement, men tended to have a strong vision in terms of achieving their goals. According to the survey, 85 percent of men had a retirement plan in place. Women, however, were less likely to be prepared than men. Twenty-five percent of women in the survey admitted that they had not done any financial planning for retirement, and of those who did establish financial portfolios for retirement, 43 percent didn’t start until their 40s and 50s. Women were also significantly less confident than men that their financial goals would be met, with more than twice as many women saying they were “very insecure” about retirement.

How They Plan
While men may place greater importance on financial planning for retirement, they lag behind their female counterparts when it comes to putting together “emotional portfolios.” Women placed greater importance on making emotional plans for retirement—planning for happiness, essentially. While most women had a clear vision of how they wanted to spend their days in retirement, men did not put as much advance thought into what would make them happy during retirement. Many said that they figured they would wait until they were actually retired to determine what makes them happy.

A Lesson in Balance
Men and women can learn from each other when it comes to retirement planning. A financial portfolio is critical to retirement success and planning should start early. However, it’s just as important to put together an emotional portfolio and plan for happiness. One supports the other and neglecting either one could jeopardize your chances of a well-rounded retirement.

*Participants in this December 2014 study were provided through the Harris Panel, including members of its third-party panel providers. 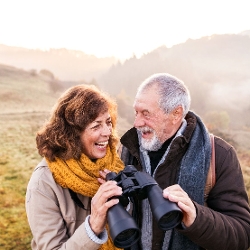