5 vacation spots that welcome you home

Planning a warm-weather getaway to escape winter's chill? Make that vacation do double duty and test the waters, so to speak, to explore whether this destination is retirement-worthy. Here are five places you might someday call home.

Austin, Texas
Austin isn't just for the young at heart. The Lone Star state's capital was ranked No. 8 in WalletHub's best cities to retire to in 2018, and although its real estate does cost more than in other Texas cities, retirees find that Austin offers dozens of benefits that offset the cost. Mild winters and low humidity aside, Austin features numerous beautiful outdoor spaces with year-round activities and events, including a full calendar of festivals. If you're a music fan, there's no better place to live than the Live Music Capital of the World. For those who are golfers, Austin was named the Best Golf City in America by GOLF Magazine.

Atlanta
Score a home run by retiring to this city, and you can take advantage of Georgia's generous tax breaks. In fact, Kiplinger named Georgia one of the most tax-friendly states for retirees. Outside of a healthy tax environment, you'll have a plethora of retirement communities to choose from, and although you might face some heat and humidity in the summer, winters are incredibly mild, which means you have year-round access to the outdoors and recreation has always put Atlanta in the spotlight. It's was also ranked No. 9 by Travel+Leisure as one of America's most cultured cities in 2015.

Charleston, S.C.
Condé Nast Traveler readers know their stuff when it comes to traveling, which is why when they name Charleston the country's No. 1 small city for eight years in a row, there's good reason. Charleston isn't only picturesque with its waterways and historic streets; it's also a booming community with a vibrant art scene, outstanding food culture and numerous recreational opportunities. You're also just a stone's throw away from numerous sea islands. Worried about health care? The city, which has also earned accolades as “America's friendliest city,” is a medical hub and home to the world-famous Medical University of South Carolina.

Scottsdale, Ariz.
Every year, SmartAsset evaluates where retirees are moving, and one city consistently among the top locations is Scottsdale. In 2018, the company reported that 1,834 seniors took up home here, up from 773 the year before. While Scottsdale comes with a higher cost of living than other cities in the state, you trade that for a higher quality of life. The city is famous not only for its mountains and golf courses ¾ there are almost 200 here ¾ but also its culinary scene, galleries and spas.

Sumter County, Fla.
It's no surprise that one of America's favorite states among vacationers earns a top spot for retirees. Credit the warm weather and sun-soaked beaches. But why Sumter County? Because it boasts perhaps the country's largest retirement community called The Villages, exclusive to folks 55 and older. The 32-square mile community, often called Disney World for adults, is bigger than Manhattan, and as of 2017, just over 115,000 individuals resided here. At the Villages, you can even participate in roughly 1,000 activities every week.

Ready for a getaway or a retirement address change? These five locations have a lot to offer. Take a look at their tourism or city websites to get more information on these and other cities that are of interest to you. Also, speak people you know who have spent time there to see what their experiences were like and to help give you an overall view of that location.

This information is brought to you by Athene — where innovative annuity solutions and unique interest crediting strategies are powered by unconventional thinking. 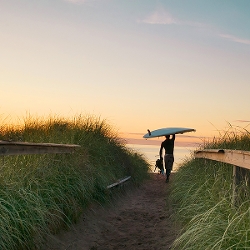 Quick tips for traveling with pets